An ART blog not for everyone...

​​ART seems to be more like the huge compost pile in my garden than the sterile infant ward, where I actually was born. Trying to survive as an artist, many drowned in the juice of their own feelings. Certainly one cannot study art. As well there is no one who understands all this stuff. History is written by its victors just like art-history. And so these strange inconsistencies arise: If one makes an excursion to the moon and chokes on all this ugly moon dust... Fortunately, I have not studied art the purest form of utter absurdity. I trust no one since childhood. A freshly-whitened panel seems suspicious to me. If I cannot stop myself and start painting, it becomes more and more difficult. In order not to lose the upper hand, I go back step by step... Sometimes I defiantly refuse painting, maybe for weeks or even for a year, to starve out all these crazy thoughts. And the whole time I rack my brain, whether they have already starved... When I finally resign after a long time and take up a paint-brush, so that it will not rot in the wash water: Then suddenly they are back, these unspeakable thoughts...

The Closed Gallery has opened...

Excuse me the gallery is still a construction site, the craftsmen have not left yet and it's going haywire...
Closed Gallery is a historical art concept from 1969, the year of the first moon-landing. I never was on the moon, I stayed on the floor, but by now I am forced to participate in this dubious art concept, undetermined powers are forcing me? The restrictions are crazy at least overdone, there is no need to close everything! In response I founded my own gallery: "The Closed Gallery", which is open now. But in my case it’s more like an asylum. By having everything closed, the asylum is one that expands worldwide. There's not much to see in a closed asylum, so you won't see much in this gallery. I really feel sorry for you as the audience, there's not much you can do except hang such a strange thing, “carnival-mask” in front of your nose and ignore everything. You think that you are protected, maybe from moon-dust, but not from a virus. Of course you will die soon, physically or at least from boredom, God bless you...
History
Closed Gallery is a 1969 piece consisting of three invitations to gallery shows in Amsterdam, Turin, and Los Angeles printed on simple white cards. They informed the recipients that during the exhibition, the gallery would be closed. “It’s the purest form of this notion of what the physicality of art is and what art is really all about. One doesn’t need to even have the gallery space", said David Platzker, who sent out numerous announcement cards worldwide, each saying simply “During the exhibition the gallery will be closed”. “I got permission from Robert [Barry] to do the show,” Platzker said. “I asked him if he would lend me copies of the three prior announcement cards and he said, ‘Why would you want them? There is no show. I don’t want people to come to the gallery because the gallery is closed.’
Source Wikipedia

Why you should never eat ART with a spoon!
If you wait too long before eating you will not starve,
but you could die of boredom.
When you eat too fast,
​you could choke on it.
When you eat too much,
​you could ruin your stomach
and cut your teeth even on the Mona Lisa,
it's not on canvas, it's on wood!
And finally, your spoon would be too small
for Michelangelo's David...

The Sow In The Parish Garden​ 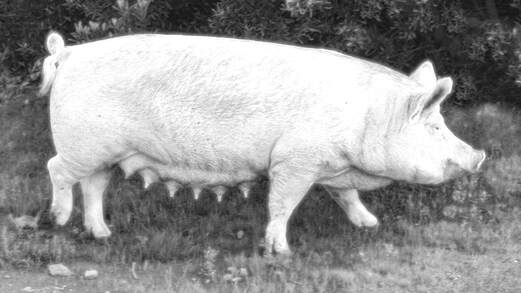 And finally, no one will wonder, why there is a pig in this story…

Arthur Wellesley may have helped keeping your feet dry, but he can't take care of your mind too...

​Creating an artwork is like fishing. You may be disappointed when you hook a worm and end up with just catching an old welly hanging. But this old boot is named in honour of the general who defeated Napoleon. The name “wellington boots (wellies)” refers to Arthur Wellesley, the 1st Duke of Wellington, who made these boots popular with the aristocrats in the early 19th century as hunting and outdoor boots. And as the history is surprising, Arthur Wellesley did not expect to become famous for his boots. And it's the same with art, no one would have expected that one day these old fishermen boots would be exhibited in a museum. 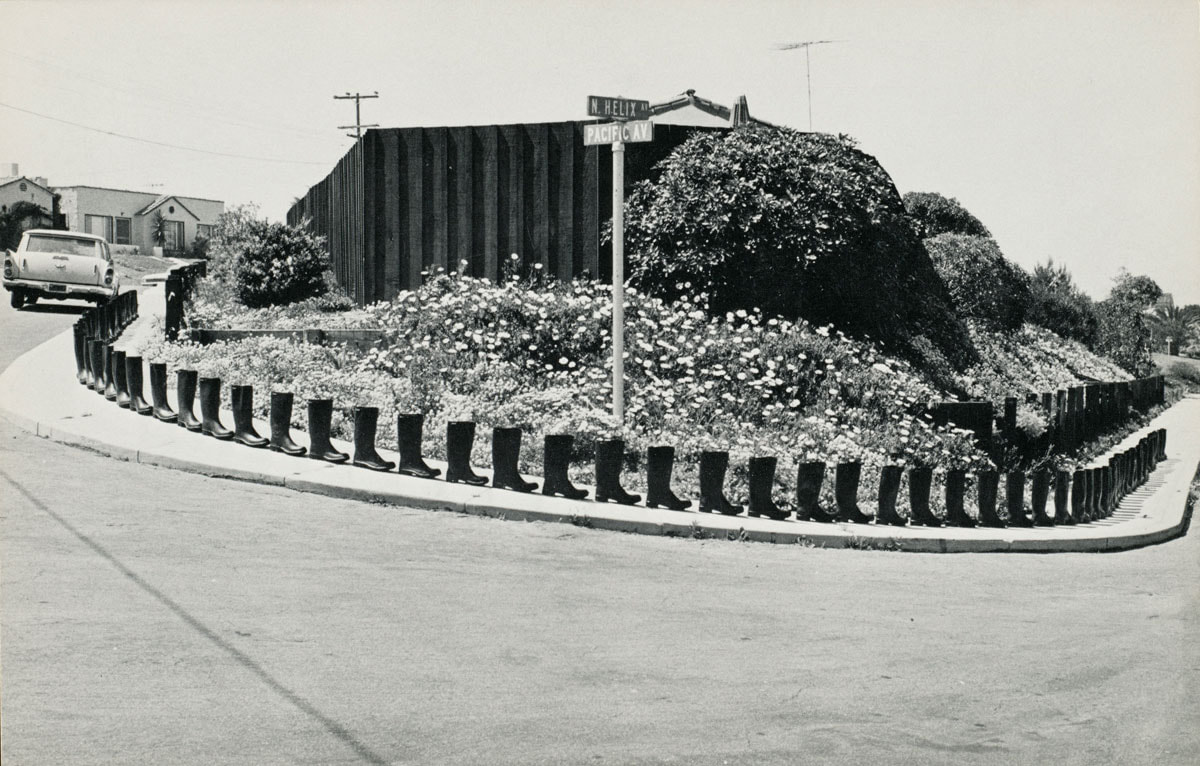 Eleanor Antin, 100 Boots at MoMA, 1973, New York
100 Boots is Antin's best-known conceptual work. In this project, she set up 100 boots in various configurations and settings, photographed them, and created 51 postcards of the images that were mailed to hundreds of recipients around the world from 1971-73. 100 Boots relied on the recipients to remember and construct the boots' adventures, as the postcards were mailed out at intervals ranging from 3 days to 5 weeks "depending upon what [Antin] took to be the 'internal necessities' of the narrative." It documents the boots in a mock picaresque photo diary, beginning at the Pacific Ocean and ending in New York City, where their journey was presented in an exhibition at the Museum of Modern Art. Source Wikipedia

The ducks don't seem to be impressed, as they go their own way...
And now it goes straight...

My art is described best by something that is created by walking up and downstairs, normally without boots... My studio is on the roof, here it’s warm and I have daylight. My workshop is in the basement, where it’s cold and dusty. There are three floors to climb up and down. So most of my inspiration is done as climbing up and down. I stay fit with this exercises on the one hand and on the other, walking sharpens the thinking-process. Each artwork is unique and requires a lot of trials. By hiding a painting for a while, and then looking what had changed in the meantime, it began to speak. I make notes about, sometimes it’s a title maybe just a title in progress… But often I stand in the basement and had forgotten why I am here. Because on the stairs, I am so engaged in thinking, that I forget everything around me. Then hurting upstairs again to continue, I remember that I cannot finish my work, because I'm missing something… Of course, a large studio at ground level would be better, where everything is on one floor, but this inconvenience has its goods too. By banishing everything that messes up to the basement, the computer gets less dirty, and computers are very tricky as you know, you just need to ask the ducks…

My sudden admission to a psychiatric clinic wasn’t just the climax of my work as an Art Brut artist, but ultimately caused its abrupt end. After 2010, the year of my "psychosis," nearly everything had changed. What I thought a disaster first, paralyzing me completely and finally culminated in a creative crisis, was in reality a chance for change and renewal. But first of all I didn't realize my absolute collapse as such a chance. It was impossible to do something, I couldn’t work, I couldn’t paint anything, I felt into a severe depression: The ability for concentration had greatly diminished, my thoughts drifted permanently, I just sat there and did nothing… Any attempt to paint ended in a piece of destruction, the vision of a painting, the capacity of imagination got lost. My previous very spontaneous way of painting, focused on the creative process, generated just senseless smeared paint. In order to bear the frustration better and to have some diversion, I was occupying myself with the internet. As a result, I decided to publish my works on online platforms and for this purpose I made photographs of my paintings. After the photos had been finished, I noticed unfortunately, that the colors on the photos were much more brilliant than those on the original. This was satisfying at some pictures, but did not match the original... Of course, it was the fault of my camera. At that time, a Sony was a must, so I used this small digital camera, and because of its smallness, it was equipped with a poor lens. For photograph in low light, Sony invented a trick: The pictures was digitally post-processed, the colors simply enhanced. Otherwise the pictures would have become gloomy, because at night all cats are gray. That was new at this time, but by now each cell phone is equipped with such a camera system. By this technology you can make useful shots in relatively dark surroundings, but the result doesn’t match reality. Later I purchased a better camera, a Nikon SLR with a fast special lens and some photo lights as supplement. I was very satisfied, further the photos strongly resembled the paintings… Well these false but beautiful colors of the Sony inspired me to rework some of my paintings to gain this effect in reality. So I acquired vibrant, flashy neon paint, and if necessary, I reworked them. Indeed, they became better, where glowing even in dim light. In my earlier work I very much used an old-master glazing technique, but glaze paintings need a lot of light. In normal lighting they look gloomy.
Then, in 2015 my first solo exhibition was in promise, at the Gallery Tacheles in Gmunden, which is specialized in Art Brut. So I had to decide how to present my paintings. Actually, they were not made for an exhibition, it's large paper work with layers of glaze, fixing them behind glass you wouldn’t see the layers. And because I disliked framing, and I wished to hang them as freely as possible, the only way to do this, was to mount them on a rigid board. As wood is too heavy, especially it’s getting thick, I decided to use a trick. I mounted them on a board of thick rigid foam and painted the edges in wood imitation, stone imitation, etc. Against expectations the exhibition was a success, the opening and the reading of humorous text of mine were well attended, even a reporter was sent by a local newspaper: “Oberösterreichische Nachrichten”… As a result, however, the question how to proceed in my way of painting became more and more urgent. In the beginning I believed that my painting blockade would disappear over time and once the ability to paint will come back from alone. My paintings would create themselves, quasi automatically. I had larger one, perhaps more abstracts in mind, but it did and did not succeed. So I continued in being busy with touch-up work: Pictures that seemed me too wild, I calmed down with specific, clear areas. If at some pictures the painting process had taken too long, and the colors appeared merely tortured, i. e. consisted solely of brown tones. I partially covered them with radiant rectangles, by setting luminous colors. I made experiments with words, inserted photos and small objects. Occasionally I placed single words in the pictures, quasi as a provocation. I put the title in the middle of the picture so it catches the eye immediately. I mounted photographs and small objects, and finally I entered the third dimension by making single parts of the picture stand out as an object. And by doing all this, over time something new emerged, something that required a clear concept, and finally the automatism as a painting stile served its time… My paintings became minimalist, creating works like "Men in a Case" and the painting "Get Home Safe," which was finally sold to a Collector in San Francisco. I had the strong impression this kind of painting style is more popular, because Art Brut will be watched on the screen in the internet, it's not for hanging in your own living room...